A world to discover

The birth of the Gran Paradiso National Park dates back to the 1922. The Italian State, accepting the donation of the royal hunting reserve by Vittorio Emanuele III, established the national Park, entrusting the administration of these territories to a Royal Commission. The creation of a protected area is strongly linked to the safeguarding of the animal symbol of the Park, the Alpine Ibex, of which, after the WW II, only 416 specimens had survived in the whole world and all of them within the territory of the Park.

It's particularly thanks to the Park Rangers that the ibex has been saved from extinction and today is present in the protected area with almost 3000 specimens.

The Park rangers have a deep knowledge of the territory, the animals and the environment of the park, and provide a service which is definitely unique, watching over the territory from dawn till dusk.

93 years since establishment, the Gran Paradiso National Park is one of the most known in Italy and in the world and contributes to the safeguarding of biodiversity of one of the widest Italian protected areas. Thanks to the exceptional natural heritage, to the good state of ecosystems conservation, to the integration of tourist and agriculture activities (today the Park is visited every year by more than a million tourists) and to its role of protected cross-border alpine area, along with the Parc National de la Vanoise and the Mont Avic National Park, has obtained in 2007 the European Diploma for Protected Areas, prestigious acknowledgement of the Council of Europe. In 2014 has been moreover included, unique Italian park, in the IUCN Green List, the green list of 23 parks all around the world, chosen by the International Union for conservation of Nature, for their role in conservation and management of protected areas.

The Park covers an area of 71.044 hectares, in between the regions of Piedmont and Valle d'Aosta. It's extended on five valleys that literally “embrace” the Gran Paradiso massif. The territory is 48% in Piedmont and 52% in Valle d'Aosta, and is characterized by very different environments, in an altimetric gradient that permits to host deciduous forests on the bottom of the valley at the lowest altitudes, followed by those of coniferous, until arriving to the alpine glaciers ended with the 4.061 m of the Gran Paradiso.

In addition to the protection and conservation of the territory, the Park is also a scientific research centre. Activities of research on the fauna and vegetation within the Park are under realization. Monitoring fauna (also through the so-called census), biodiversity and other activities are carried out on the territory extensively, in collaboration with the Park Rangers and different universities and research centres, such as the CNR.

In order to guarantee the socio-economic development of the Park population, the Body promotes experimenting with methods of land management, suitable to realise a sustainable integration between man and natural environment aiming at preserving the natural heritage. A sustainable development that the Body promotes, contributing to new productive and compatible activities, as well as safeguarding cultural traditional values, present in the agro-sylvo pastoral activities, in handicraft and in the traditional local architecture. 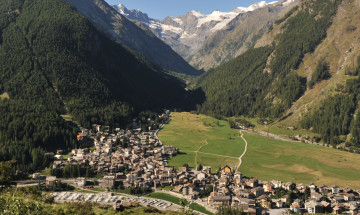 Cogne is a genuine, characteristic mountain village with 1,500 inhabitants and lies at 1534 metres above sea level. The valley offers a wealth of natural beauty extending as far as the eye can see over meadows, crystal-clear streams and on towards snow-capped peaks. All of this makes the village an ideal place for both summer and winter tourism. Cogne Valley is considered the capital of the National Park, created in 1922 when Savoy King Vittorio Emanuele III donated his legendary hunting reserve to the country. The Gran Paradiso is Italy's oldest national park and offers a home for many rare species of animal, plants and flowers within a splendid Alpine setting. 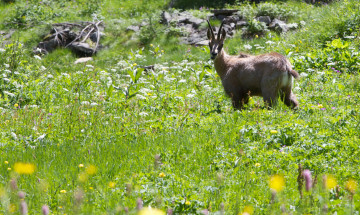 Larch, European spruce, Swiss pine and silver fir, these are the trees you will find in woods on the valley floor. At higher altitudes, first there are alpine meadows, which are carpeted with flowers in spring, and then these give way to rocks and glaciers. The main animals populating our valley are the Alpine ibex (the Park's symbol – the population numbers around 3,500), the chamois (numbering around 7,000), marmot, fox, lynx, stoat, golden eagle and, in recent years, the lammergeier and wolf. There are also numerous species of birds: buzzard, woodpecker, titmouse, ptarmigan, Alpine chough, sparrowhawk, goshawk, tawny owl, little owl. In the lakes and torrents there are two species of trout: one native, the brown trout, the other introduced, the salmon trout.

The Giardino Alpino Paradisia is a truly unique garden, hovering at 1700 m above sea level in the Grand Paradiso National Park.